After a month of denials, distortions and counter-accusations, Russia gathered the international community at the UN Security Council and again dismissed as fabricated the UK’s finding that Russia was responsible for the attempted assassination of former Russian spy Sergei Skripal and his daughter Yulia using a military grade nerve agent in Salisbury, England.

Russia called the Security Council meeting one day after losing a vote 15-6 at the Organization for the Prohibition of Chemical Weapons (OPCW) at The Hague seeking a new joint investigation into the Salisbury attack, to challenge the investigation the UK has been conducting since the attack took place on March 4.

After official statements from Russia’s Foreign Ministry not only deflecting responsibility, but outright accusing the US and the UK in a “provocation”–poisoning the Skripals as a pretext for expelling Russian diplomats–it was difficult to see how calling a UN meeting would move toward a resolution of the matter. Predictably, it was an opportunity for Russia to continue its disinformation campaign, even as the world unites in seeing through the now familiar playbook.

In a manner that followed previous official statements, bizarrely sarcastic and seeming to trivialize the use of a weapon of mass destruction on civilians in a British suburb, Russia’s UN Ambassador Vasily Nebenzya on Thursday rambled for some 30 minutes, protesting indignantly the UK’s “unprofessional” and “hasty conclusions,” accusing Britain of using “hyped-up statements” and reiterating that there was “no evidence” to substantiate claims of Russia’s guilt. “We live in a time of lack of intellectual clarity.…What happened to good old England?” he lamented.

“Gentlemen, I don’t even know what to say. it’s like theater of the absurd. Couldn’t you come up with a better fake story?” Nebenzya went on to accuse London of waging a propaganda war, “poisoning our relations with other countries” with an “anti-Russia canard.” He even accused the UK of using Goebbels’ tactics to impart a “collective psychosis” using the media as a “psychotropic substance” to influence public opinion against Russia. He waived some of the slides the Brits used in a presentation in Moscow, stating they were laughable and did not constitute evidence. (I have previously written on Russia’s Foreign Ministry pretending they had gotten their hands on “secret slides,” as if they were meant to contain classified information. They were in fact infographics to support an official presentation.)

Nebenzya’s attempts to poke holes in the case against Russia were equally as flamboyant and absurd. He mocked the use of  “highly likely” and other probablistic language used in UK conclusions. He brought up Boris Johnson deleting a tweet as curiously suspicious. He said Novichok isn’t copyrighted by Russia. And he listed a slew of questions, he insisted were of critical importance that London had not yet answered. One of them was: “What about the Skripals’ pets? They had two cats and two guinea pigs. Why isn’t anyone asking about them?” This mirrored a tweet from the Russian Embassy earlier in the day.

After the endless obfuscation, gaslighting and righteous indignation, it was difficult to take Nebenzya seriously. Even his warning “We have told our British colleagues that you are playing with fire and you will be sorry… It will boomerang” sounded more perfunctory than threatening. Out of context, this may have sounded dangerous, given Russia’s outrageous conduct and aggression. But as Nebenzya made no attempt at even trying to respond credibly to any accusations, he was left hurling accusations, huffing and puffing, using over-the-top hyperbolic language. He was “stunned” by these “remarkable” and “absurd” events. (He used “absurd” at least 5 times by my count.) At one point, Nebenzya pulled out a copy of Alice in Wonderland, and read an excerpt in English. So even the “you’ll be sorry” warning rang hollow. His speech was mostly sound and fury, signifying nothing.

Nebenzya expressed particular offense at being given 24 hours to respond to London’s initial request on March 12. Nebenzya stated:  “We said Russia would be ready to respond within 10 days. But instead, London put forth a completely absurd 24 hour ultimatum. Obviously we rejected it. No one and under no circumstances can anyone talk this way – using this tone – with Russia. This ultimatum was transmitted to the Russian Ambassador orally by Boris Johnson. The Foreign Secretary made clear [reading English] There are only two possible scenarios: Either the Russian state has attempted murder on British soil using a chemical weapon, or Russia lost control of its stockpile of nerve agents. The Foreign Secretary asked the Russian Ambassador to explain which of the two possibilities was true, and to account for how the use of this chemical agent could have been deployed in Salisbury. We were given 24 hours to respond to this. That was it. There were no other questions.” 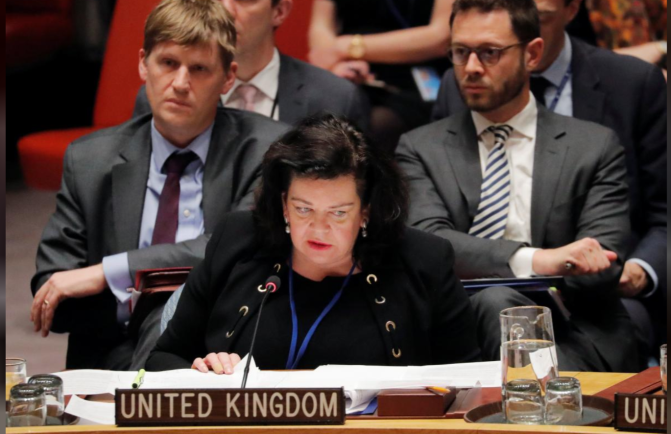 The British UN Ambassador Karen Pierce responded in significantly different tone and substance. She began by providing the “intellectual clarity” Nebenzya said Russia sought, pointedly adding that, unlike Nebenzya, she would “stick to the facts” in her statement. First she debunked “there’s no evidence” by pointing to details of UK’s investigation:

“Following the poisoning on 4 of March UK has launched one of the most comprehensive and complex investigations into the use of a chemical weapon ever: it involves more than 250 police detectives, supported by range of specialist experts and partners, scrolling thru more than 5000 hours of cctv, examining more than 1300 pieces of exhibits and are interviewing more than 500 more witnesses.”

Then Pierce zeroed in on the gravity of the attack: “We all know why that investigation is underway. It’s because a military-grade nerve agent was used in an attempt to kill civilians on British soil. It was carried our recklessly and carried out without regard to public safety. It was a weapon of mass destruction. A British police officer was in critical condition alongside the Skripals. Ordinary members of the public going about their daily business were put at risk.”

Pierce explained that the UK set the 24 hour deadline because of the gravity of the weapon used. “This is no ordinary poisoning attack.” And yet, Russia has simply refused to cooperate, considering the request null and void. “They didn’t say, please give us more time.… They rejected the very premise of the request.”

Pierce likened Russia to an arsonist turned fire fighter, wishing to investigate the fire it set. She was specifically speaking to Russian officials’ recent condition that they will accept the investigation’s conclusions only if Russia’s experts participate in the investigation. She also noted that this followed a Russian pattern – undermining international institutions to discredit their findings. Insisting on Russian experts, she said, sets a test “that no independent investigation could credibly tolerate.”

“This is part of wider pattern of irresponsible Russian behavior,” Pierce stated, noting Russia had discredited the joint investigation mechanism into the use of chemical weapons in Syria, it invaded Georgia and Crimea, it shot down civilian airliner MH17, and bungled an attempted coup in Montenegro. “Each time these acts are accompanied by distortion and disinformation.”

Finally, Pierce explained that the UK came to the conclusion that it was highly likely Russia carried out the assassination based on on three considerations: 1) the positive identification by experts at Porton Down of the specific chemical used, the Novichok nerve agent; 2) the knowledge that Russia produced this nerve agent within the last 10 years and remains capable; 3) Russia has investigated ways of assassination through the use of nerve agents. Moreover, Russia has a record of conducting state-sponsored assassinations. “We also made our own assessment Russia views defectors as suitable targets of assassination, and, indeed there are public statements to that effect.”

Skripal, 66, and his daughter Yulia, 33, remain in Salisbury District Hospital following the attack on March 4. Sergei Skripal is said to be in critical but stable condition. Yulia Skripal is now recovering and announced Thursday that she is getting stronger every day.

UK scientists believe the Skripals were poisoned with a Russian-made nerve agent, Novichok. The Times of London reported that UK intelligence had pinpointed the location of the Russian laboratory that manufactured the nerve agent.

Last week,  the UK expelled 23 Russian diplomats in the wake of the Skripal attack, sparking a wave of similar expulsions by allies around the world in solidarity with Britain. 25 countries have expelled over 150 Russian diplomats. The US expelled 60. Moscow responded in a tit-for-tat fashion, kicking out diplomats, including 60 American diplomats. It also ordered the closure of the US consulate in St. Petersburg.

Although long overdue, the international community is finally beginning to understand and respond to the threat Russia poses. It’s inevitable that the more out-of-bounds Russia behaves, the more people recognize and expose the Kremlin playbook. Since Russian troops began pouring into Crimea and seizing buildings in 2014, we have seen a steady disturbing stream of Russian aggression hand-in-hand with aggressive Kremlin propaganda campaigns – in Ukraine, in the Balkans, in disrupting elections in Europe and US, and most recently in the unprecedented chemical weapon attack in Salisbury, England. Each time the Kremlin is caught, they respond with denials and disinformation. Even in the most obvious cases, they gaslight, decrying “you have no proof.” This often gets picked up in the media, as Russia’s propagandists leverage the tradition of reporting “balance” in Western journalism as a mechanism for spreading lies in the form of denials. When seeking balanced viewpoints in their stories, journalists would be wise to heed Lithuanian Foreign Minister Linas Linkevičius’ admonition: “A lie is not an alternative point of view.”

This article originally appeared at StopFake.org