Russians took to the streets this weekend in the first major call to action by opposition politicians since their leader Boris Nemtsov was assassinated seven months ago. The protest rally, themed “Change of Power,” was held in the residential district of Marino, on the outskirts of Moscow, after authorities denied access to a more central Moscow location. The rally was held on September 20, the 4-year anniversary of the so-called “castling” maneuver announced by then Prime Minister Vladimir Putin in September 2011 that he would be the one running for president, for a third term, instead of sitting president Dmitry Medvedev, a move that triggered mass protests and civil disobedience. Russia hasn’t been the same since.

The “Change of Power” action comes amid more controversy and difficulty internally as well as externally for Russia. Not only has Russia been waging an openly covert war in Ukraine after it annexed Crimea by force, it is at this moment engaged in a buildup of forces in Syria. Russia is more isolated than it’s been in decades, viewed as a rogue and aggressive state threatening its neighbors and challenging settled international laws and protocols. As if a cruel irony, Russia this month has officially taken over the presidency of the United Nations Security Council which entitles it to play a pivotal role in setting the world organization’s security agenda. Putin himself is scheduled to fly to NYC to speak to the UN General Assembly on September 28, no doubt seeking legitimacy for his regime and policies on a world stage.

Putin’s foreign policy has had substantial impact inside Russia as well. International sanctions together with the dramatic drop in oil prices and subsequent slumping ruble have made everything from mortgages to heating and food more expensive for ordinary Russians. Government has been tightening its belt too. Medical professionals have been laid off, hospital construction has been delayed indefinitely. Even Russia’s propaganda industry budget has been reduced.

Government repression has ramped up as well, as if to keep a lid on the growing stagnation and dissent. Russian mothers burying their soldier sons are asked to stay silent about the circumstances of their deaths in Ukraine. Others have had to fight to receive death benefits. Human rights lawyers aiding these families have been targeted for prosecution. Bookstores are self-censoring, while non-governmental public education organizations, including world renown Memorial and Dynasty, have been designated “foreign agents.” Independent media as well as people are leaving Russia.

In March of this year, opposition leaders had planned an “Anti-Crisis Spring” protest march to address just these critical issues. Censored and ostracized from Russian TV, Putin critics viewed that rally as an opportunity for grassroots education and politics, a way to inform the propaganda-consuming ordinary Russian citizens that their troubles and Russia’s crisis are the direct result of their government’s actions. And Putin, as head of the government, bears the principal responsibility for foreign wars and related domestic crises, and therefore needs to go.

There was controversy concerning the Marino location among opposition leaders when the Spring March was being planned. Some were bitter that authorities wouldn’t permit the rally in a more central Moscow location. They felt classically “injured and insulted” by being pushed out literally to the edges of the capital. Others thought it would hurt the movement because less people would attend. In the end, they decided to go ahead and hold the march even if they couldn’t get approval in a more prominent central location. Better to have a voice somewhere than nowhere.

As it turned out, likely not coincidentally, the Spring March never happened because those voices were silenced, first by the temporary arrest of the popular Alexey Navalny, and then by a horrific and permanent tragedy. The protest’s leader Boris Nemtsov was murdered in the shadow of the Kremlin in his own beloved central Moscow neighborhood on the eve of what promised to be one of the most significant mass rallies in Moscow in recent days, attended by tens of thousands of people if not more. After the shocking murder, “Spring” was cancelled. Instead March 1 became the day of Nemtsov’s mournful funeral procession.

This dramatic turn of events seems better suited to an epic novel, a Godfather movie or a Shakespeare play than the real world. But that’s where we are, in a kind of bipolar world of shock and trauma mixed with disbelief and determination.

Amazingly enough, and to the Kremlin’s dismay, the opposition is not dead yet. They sought to prove it this week with the “Change the Power” rally. It’s hard to say just yet how successful the action was. On the one hand, like getting back on the bike after a fall, just holding a rally which people actually attended is success in itself. On the other hand, there were many not in attendance, suggesting that the opposition is still divided, which makes their shared goal of transferring the reins of Russia to someone other than Putin in a future peaceful democratic election seems ever more distant.

Russia’s opposition has been notoriously divided from its very beginning. But after the assassination of their most prominent leader Boris Nemtsov in February, they showed laudatory and quick determination to unite in order to make some headway against Putin through elections. Still fresh from the trauma of losing their friend and colleague, they had meetings and conferences, which resulted in the formation of the “Democratic Coalition,” to pool resources and candidates to be competitive in elections. Their first test was to be this year’s regional and local elections, followed by next year’s important parliamentary election.

One week ago, Russia held regional and local elections and, unfortunately, but not too surprisingly, the opposition suffered a major defeat. Of course, the ruling party did just about everything imaginable to prevent opposition candidates from participating effectively if at all in elections, including rejecting signatures which disqualified candidates from ballots, raiding party headquarters, preventing independent observers, spreading disinformation, vandalizing cars, even arresting people on trumped up fraud charges. In the end, the opposition managed to get approved on only one election ballot, in only one distant region, Kostroma, and even there, by official accounts they received a paltry 2.5% of the vote. Despite irregularities and likely fraud, this result was still a stinging disappointment. Bloggers and politicians alike are still assessing the damage.

Whatever the results of the analyses, pulling off a large organized gathering in Russia under these conditions by people who are already embattled, exhausted and surely traumatized, still reeling from an assassination and a failed if unfair election, is nothing short of a miracle. There was unity, words from the heart, and of course, poetry.

Though kicked and brutalized and palpably hurting, Russia’s opposition is continuing its work. The mix of emotions on display in Marino was captured by bloggers, photographers and journalists in attendance. Many wonderful photos by Evgeny Feldman of Novaya Gazeta can be found here, and by Martin here.

I found Russia blogger’s Aleksey Nasedkin’s report particularly interesting because he captures so authentically not only the faces but importantly the tone and mood of ordinary Russians who have been struggling to build a democratic society in Russia. Below is Nasedkin’s photo report, with comments I translated into English. To his words I’ve added explanatory remarks in brackets as necessary. Nasedkin’s original Live Journal blog in Russian can be found here. 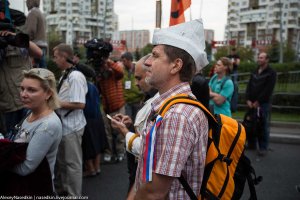 A version of this article appears at EuromaidanPress.com.

2 thoughts on “Not Dead Yet: Russia’s Opposition Rallies in First Major Protest Since Nemtsov Assassination”