Boris Nemtsov, Moscow, March 15, 2014, leading a protest against the annexation of Crimea and the war in Ukraine. Banner reads, in Ukrainian: “For Your Freedom and Ours”

Activists in Russia are circulating a petition on social media in support of an international investigation into the assassination of Boris Nemtsov, in accordance with a March 12, 2015 European Parliament Resolution. The former Deputy Prime Minister of Russia turned opposition leader was fatally shot on the night of February 27, 2015, just outside the walls of the Kremlin in picturesque central Moscow.  The petition is addressed to three international organizations, the Council of Europe, the Organization for Security and Cooperation in Europe (OSCE), and the United Nations.  Below is the text of the petition translated into English.

To:   The Council of Europe, The Organization for Security and Cooperation in Europe (OSCE), and The United Nations

On March 12, 2015, the European Parliament adopted the Resolution 2015/2592 (RSP), requesting an independent international investigation into the murder of the Russian opposition politician Boris Nemtsov.

The Resolution pays tribute to Boris Nemtsov’s transcendent merits as a prominent leader of liberal and democratic opposition in Russia, a founder and a leader of the political movement Solidarnost, a reformer of the Russian post-Soviet society and economy. Nemtsov was a strong advocate for a modern, prosperous, democratic Russia, open to the world.

The Resolution also states that the killing of Boris Nemtsov is one of several political assassinations and suspicious deaths in Russia since 1998, and that the Russian authorities have established a political atmosphere of cultivating and provoking hatred in the society, creating fertile ground for such murders, violence, and pressure on opposition leaders, activists and ordinary members.

In Paragraph 4 of the Resolution, the European Community requests an independent international investigation into the murder using the instruments available within the framework of the OSCE, the Council of Europe and the UN. The need for this is becoming even more obvious considering the long time that has passed since the crime was committed.

We welcome the position of the European Parliament and ask for a prompt independent international investigation into the murder of Boris Nemtsov.

We are confident that your efforts will help to bring the investigation conducted by the Russian authorities to full completion, which means that not only the perpetrators of the murder, but also its masterminds and paymasters will be identified and brought to justice.

The petition has an accompanying letter, written by journalist Igor Yakovenko, which further explains the necessity for an independent investigation outside of Russia’s judicial system.  I have translated the text of the letter into English, and I am happy to report that the petition organizers have included my translation along with their petition:

More than six months ago, right next to the Kremlin, the most brilliant and uncompromising Russian politician was killed. He campaigned for the dismantling of the criminal regime, against aggression in Ukraine, and for a peaceful and democratic Russia.

We do not trust Russian law enforcement agencies or Russian justice. We have good reason, since the Russian government, either directly or indirectly, is involved in the murder of Boris Nemtsov, having created an atmosphere of hatred within society, which has become fertile ground for such killings.

We could not keep Boris Nemtsov from an assassin’s bullet, but we can and must pay tribute to his memory by helping uncover the truth about this crime.

The truth about the murder of Boris Nemtsov would be a step towards the liberation of Russia from the mountains of lies, against which Nemtsov so fearlessly fought during the final years of his life.

You can learn more about Boris Nemtsov and his brazen assassination near the walls of the Kremlin from Euromaidan Press, where a version of this article originally appeared.

Update (October 10): In barely a month’s time, the petition has received over 26,000 signatures, as announced by organizers today. This happy news comes just one day after a somber day of birthday commemorations, remembrances and a Memorial Concert for the slain opposition leader. Boris Nemtsov would have turned 56 on October 9, 2015.

Update (November 4, 2015):  Mikhail Shneyder, a petition organizer, posted an update on the petition’s progress. In it he asks for people to sign and distribute a companion petition, seeking the Moscow bridge authorities to allow the people’s memorial of flowers and tributes to remain on the Moskvoretsky Bridge, the site of Nemtsov’s assassination. Below is my translation, along with the link to the companion petition:

* * *
Nov. 4, 2015 – Friends! As of today we have gatherered 29394 signatures. Plus over 2000 signatures have been gathered off-line, on the bridge where Boris was killed. Here and elsewhere, not only Muscovites, but people from all over the world are signing the petition, from Austria, Argentina, Belarus, Belgium, Germany, Israel, Spain, Italy, Canada, Mexico, US, Ukraine, France, Chile, Sweden, Switzerland, Estonia…
Now, as our friends are actively searching for mail addresses, we decided not to close the petition. We hope that in this time we will be able to collect not only more signatures, but also get help in one other area:  [Companion Petition]  I know that you have already done this, but let’s write about these two petitions on our social networks again.  Let’s try.  We have to do them both. 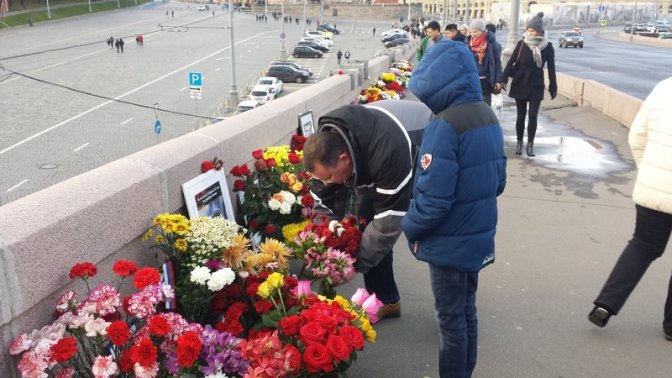 A version of this article appears at EuromaidanPress.com.